Patriotism and Piety on the Road this Summer

In the upcoming weeks, I’ll have some opportunities to take my Patriotism and Piety book on the road. I’ll be doing “Meet the Author” events at three Barnes and Noble locations. I’ll be signing books and will be happy to talk about the Federalists, Religion, and even what implications those categories have for today.

So, if you’re a reader in the area, please come out and say “hello!”

This has definitely been a “John Jay in Public” week for me.

On Tuesday night, I had the privilege of talking about John Jay’s life, his view of religion in public life, and how that fit into a Federalist mind-set. The lecture took place at Cairn University, in Bucks County, suburban Philadelphia. Their president, Todd Williams, was a great host.

It was also a real thrill to talk about John Jay at an event co-sponsored by the John Jay Institute. I think the Institute is doing great work. They have even named me an affiliated scholar.

Then, on Wednesday, I presented a Work-In-Progress Seminar at Princeton. The event was held at Prospect House, the former residence of Princeton Presidents. The event took place in the library, so I was presenting where Woodrow Wilson may once have gone to read. 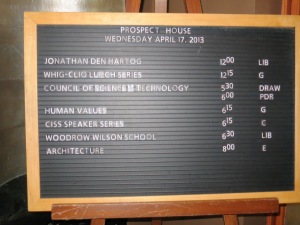 The session went well, and my colleagues offered great input from a range of disciplinary perspectives.

The best comment, though, came from my colleague Adam Macleod, who concluded that I should make up wristbands that said “WWJJD?” for “What Would John Jay Do?” I can already see the marketing tie-ins!

I should also take the opportunity to mention I’m happy to talk about John Jay in public settings for just about anybody who will have me.

If anyone is interested, I’ll be giving a public lecture next Tuesday, April 16th, 7PM at Cairn University in Langhorne, Pennsylvania.

The talk is entitled “John Jay, Piety, and Public Life: Religion and Federalist-Era American Politics.”  As I’ve been preparing the talk, I’m pretty sure I’ll hit on all of those points.

The event is co-sponsored by the John Jay Institute and Cairn University.