Sitting on my school desk is a rather large stack of books for my summer reading. Some of them are in my academic field, some arrived from publishers, and some I just found interesting. I thought one way of processing them might be to blog about them as I go through the summer. Let me say I won’t be providing full reviews but only providing some key impressions I have with the books.

I’ll start off the series today with the book Salvation with a Smile: Joel Osteen, Lakewood Church, and American Christianity by Phillip Luke Sinitiere.

The book came out in late 2015, but I just had the chance to get to it this past month. I definitely enjoyed it and learned a lot. Because of Sinitiere’s efforts, I feel like I can speak both more fairly and more confidently about Osteen. That’s a win all by itself.

The book has several strengths.

It provides a very strong congregational history of Lakewood Church in Houston. In case you were wondering where Osteen’s megachurch came from, this book provides a great, fine textured look at the congregation. In the process, Sinitiere does a great job of unfolding the life of Joel’s father, John Osteen, the church’s founder. In doing this, Sinitiere also succeeds in placing Lakewood on the spectrum of American charismatic Christianity.

A second strength is Sinitiere’s very fair parsing of  Osteen’s messages. Sinitiere does a great job at highlighting the themes that tie together Osteen’s messages, which he remarks have evolved even while remaining consistent on several themes.

In looking at Osteen’s ideas, Sinitiere identifies two key influences on Osteen. The first is John Maxwell, the motivational speaker. Maxwell likes to encourage “leaders” (of all stripes) to fulfill their “visions,” and Osteen picked up this language. The second is Joyce Meyer. This flashy female televangelist emphasized the significance of positive thinking and recovery in all parts of life. Osteen picked ideas about positive thinking and positive confession and worked it into his messages. Identifying Maxwell and Meyer as formative influences help us understand where Osteen is coming from.

I mentioned above that the book places Lakewood church on the spectrum of American Christianity. Where does it fit? In particular, Lakewood should be understood as part of Charismatic American Christianity that emphasizes the Prosperity Gospel. Sinitiere shows that this isn’t a slur: it’s a statement of fact. Since John Osteen’s days of ministry, the church has been linked to the nexus of “Prosperity Gospel” formed by people like Oral Roberts, Kenneth Hagin, and Kenneth Copeland. Osteen might be more media-savvy, but his preaching and his church grow from those emphases. (In passing, let me say that any readers who want to know more about the Prosperity Gospel as a whole should pick up Kate Bowler’s great book on the topic.)

Let me mention two concerns I have with the book.

First, I was a bit uncomfortable with the way Sinitiere describes the Prosperity Gospel movement as a “neo-Pentecostal” and then lumps them in with other Charismatic and Pentecostal movements. It strikes me that this muddies the water to identify Prosperity Gospel preaching with the rest of the Charismatic movement. There is some overlap, it’s true, but this catch-all term doesn’t do justice to the nuance of these Spirit-emphasizing movements.

Second,  I’m not sure about the audience for the book. I should say that it’s pitched to an academic audience. As an historian I enjoyed it, but I would be hesitant to recommend it to a general audience. There is too much direct reference to other scholarship in the text and too many scholarly by-ways that slow the writing down. With the topic and with Sinitiere’s research, this could easily have been a great mass audience book, but I fear it’s been kept too much as an academic monograph.

If this topic sounds interesting, don’t let me discourage you from reading the book! You can also listen to Sinitiere doing an interview on the Research on Religion podcast.

Second, my favorite nugget in the book is that Victoria Osteen–Joel’s wife–wrote a series of children’s books. One of them is titled Hooray for Wonderful Me! I’m thinking I should take that as my new tagline. I’ll see how my family members appreciate it when I regularly quote that around the house.

Today, at the Religion in American History blog, I had the chance to do a web-interview with Daniel K. Williams about his new book, Defenders of the Unborn: The Pro-Life Movement before Roe v. Wade.

I very much appreciated Dan’s first book, God’s Own Party, about the rise of the “religious right” in the Republican Party. I have even taught it to good effect.

After that book, Dan turned his attention to the pro-life movement, which has been part of the great moral and cultural debates of our times. Dan found a surprising back-story to opposition to elective abortion, which he chronicles in the book. The final chapter also makes sense of the shifts of abortion-related politics in the later 1970s and 1980s.

I highly commend both of Prof. Williams’s books.

One of the great joys I have in the summertime is the (slight) increase in the flexibility about what I can read and think about.

This summer, one of my “outside the box” reads was Going Clear: Scientology, Hollywood, and the Prison of Belief by Lawrence Wright. 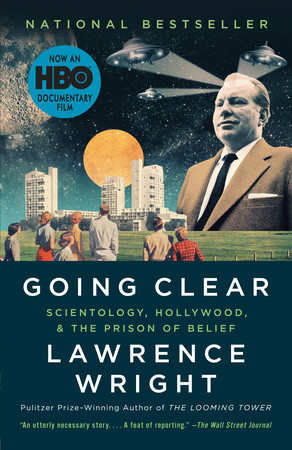 I found the book fascinating. It was well worth my time, and I would suggest it would be well worth yours. If you have ever been curious about Scientology, ever known some Scientologists, or just wondered what was happening with Tom Cruise and Katie Holmes, this book gives great insights.

I wrote an extended review of the book at the Religion in American History Blog.

In addition, I was able to work in a shout-out to Adina Johnson, a University of Northwestern-St. Paul History Major now at Baylor University.